–  Ana Lúcia Beck (UFRGS, Brazil), Moving Self: A Short Reflection on the Presence of Travel in José Leonilson’s Poetics

In A tale of monstrous extravagance: imagining multilingualism (2014), Tomson Highway defends the importance of multilingualism and considers music the original and only universal language. As a classically trained pianist and composer, he has written music for his plays, as is the case of the musical Rose and his children’s play The Incredible Adventures of Mary Jane Mosquito. The musical pieces from these two plays were transformed into a musical show in a cabaret style – the pianist is Tomson Highway, the singer and performer is Patricia Cano, and a saxophonist is invited to be on stage with them in every tour they make. The cabaret shows performed all over the world have been fundamental for Highway’s diving into other cultures, which transforms his own writing. Highway’s Brazilian experiences are noticeable by the incorporation of Brazilian music in his plays: he composed a samba called Rio in High January in Rose (2003), and the Cree samba “Taansi, Nimiss” in his latest play The (Post)mistress (2013). This paper explores how Highway reads Brazilian culture through music and the importance of his cabaret shows for the transcultural aspect of his theatrical work. We propose a poetics of tricksterism as Highway’s strategy to engage with the world in a global perspective and at the same time reinforce Aboriginal cultural and spiritual traditions.

Stanley William Hayter’s studio, Atelier 17, became a centre for modernist printmaking in the twentieth century and part of a movement to reclaim engraving and etching as media of artistic expression in their own right. Hayter’s experiments in printmaking attracted major figures in the visual arts in Paris, from the surrealists (Andre Breton, Salvador Dali, Max Ernst) to figures such as Picasso and Chagall. Hayter (1901-1988) also had a significant and under-examined role in Canadian modernist printmaking, as artists from the Americas began to travel to Paris to work with him. My paper explores Hayter’s impact on the early career of South African-born artist, Jennifer Dickson RA, OC (1936 – ), who immigrated to Canada from Britain in the late 1970s and whose work is considered of national and international significance. 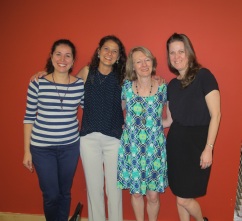 For Jose Leonilson (Brazil 1957-1993), traveling is a pivotal aspect in the constitution of his poetics. But in which ways must travel be considered in order for this implication to be perceived? And, in what ways does traveling relate to the actual elaboration of his paintings, drawings and fabric objects? Understanding the notion of travel in the case of Leonilson does not only implicate the geographical and topographical aspects of moving from one place to the other, it also fundamentally implicates identifying a desire to travel which is triggered by a deeper desire of being moved within; of moving one’s own self as much as moving through places and locations. This is the grounding consideration that enables an understanding of the entanglement or interrelation between traveling and visual representation in Leonilson’s oeuvre. In such regard, traveling was not only responsible for Leonilson’s artistic maturation but also for the production of visual representations which, at times, relate to more conventional maps in terms of topographic representation, and at other occasions try to convey a displacement of a self faced with new people, places, experiences, feelings and emotions. Such displacement is dearly hold for it is the emotional odyssey and the unlearning possibilities that really keep one going.

P.K. Page’s well-known poetic silence is often linked to her sojourn in Brazil, where she lived for two and a half years in the late 1950s as the wife of the Canadian ambassador, the journalist and editor turned diplomat W. Arthur Irwin. So it is ironic that during this poetically barren period in English that Page would write three poems in Portuguese, two of which she delivered in a speech that she gave to the Brazilian Academy of Letters (Academia Brasileira de Letras) in May 1958. My paper, “The Brazilian Apotheosis: P.K. Page’s Portuguese-Language Poems,” examines the three short nature poems that Page wrote in Portuguese, arguing they reveal not only the depth of the poet’s determination to learn Portuguese but also her considerable engagement with Brazilian culture, especially poetry.

The unfamiliar landscapes and cultures of Mexico provided the context for an intense mid-life psychic and spiritual journey for Canadian poet and visual artist P.K. Page/Irwin as she made her way through her darkest period. Mexico in the early 1960s provided the privileged ambassador’s wife with a remarkable convergence of diverse thoughts, ideas and people. Inspired by her personal reading list of challenging studies of mysticism, psychology and alchemy, Page embarked on her inner journey in 1963. In this paper I argue that Mexico provided important intersections between the personal and communal, scientific and spiritual, intellectual and emotional, resulting in Page’s crucial immersion in Subud and deep enquiry into molecular/atomic vibrations. Page was opened to powerful private and public movements through the careful development of her relationship with Mexico. Objectionably colonial in its use of Mexico as a “backdrop” for the examination of “one” Canadian “mind,” Page’s Mexican Journal is, I argue, paradoxically postcolonial at the same time, particularly in its blurring of borders between various belief systems and in its refusal to discriminate between the world’s religions.

In this paper I will examine P.K. Page’s attitude to the “foreign” tradition of Sufism to which she devoted an enormous amount of time and energy in her later years. In a passage in Hand Luggage she says “I realize … [w]e have other dimensions, greater by far / than those our traditions require us to fill” and she attributes this realization to Idries Shah, whom, in a note, she identifies as an “exponent of Sufism in the West.” But while there can be no doubt about the impact on Page of her encounter with Shah’s writings, I would question the degree to which this encounter led her to engage in a genuine “cross-cultural dialogue.” The passage cited above suggests that non-Western traditions, such as Sufism, are useful insofar as they enable us to discover our own “other dimensions” and thus to realize that we are “greater by far” than “our traditions” suggest.  But, I would argue, this apparent critique of “our traditions,” is, paradoxically, an expression of them, an expression of the quintessential Western traditions of individualism and self-help – and, as such, it goes against the grain of Sufism whose essence is self-annihilation (fano) rather than self-aggrandizement (“greater by far”). I would further argue that Idries Shah’s claim that Sufism has only a contingent connection to the Islamic world in which it arose, not an essential one, enabled the adherents of his version of “Sufism in the West,” like Page, to forego “cross-cultural dialogues” with the culture of Islam.

Considering the argument raised by scholars such as Tim Youngs who suggest that travel narratives engage with travellers’ previous encounters with other “cultural representations of a place,”  I propose to read the poetry of Canadian writer Jan Conn in relation to the legacies of the discourse of travel and exploration in South America, specifically in the Amazon region. As a result of her many geographical crossings in varied landscapes, Conn’s poetry can be approached as a travelogue of impressions and re-discoveries of different places, peoples, and cultures particularly due to the fact that she is both a writer and a scientist. In this paper, I focus specifically on Conn’s book Jaguar Rain: the Margaret Mee Poems (2006), in which the poet re-writes the fifteen expeditions of British botanical artist Margaret Mee in the Amazon region between the years of 1956 and 1987. Since Conn’s poetical reconstructions of Mee’s journeys reinstall the tropes of “exploration” and “discovery” commonly associated to colonial European narratives of the New World, I examine in which ways her poems also problematize such tropes, especially in relation to the depiction of Amazonian nature.

One of the effects of the transatlantic slave trade from Africa to the new World of Americas is the transplanting of the culture of the slaves from their country of origin to their new environment. It is also interesting how they have managed to hand down their oral traditions and culture from generation to generation despite violent and dehumanising attempts to wipe out such culture. The survival of the oral traditions of commercial slaves and their current impact will be the focus of this paper. I engaged Walter Ong’s argument of the primacy of literacy over orality and how, by “technologising the word”, literacy captures the essence of the word in ways that orality cannot. Drawing from my experience as a Writer in Residence in the city of Salvador, Bahia in 2004, and my interactions with the various oral traditions that are found in the Yoruba culture of western Nigeria and simultaneously existing in Brazil, I intend to argue that orality has a vital role to play in modern society and offers alternative route to social cohesion. The power of the “voice” to unite and spur people to action will also be explored with a view to restoring the currency of orality.

My paper will examine how texts about the Canadian punk rock road trip function as the modern equivalent to adventure travel literature and wilderness trip stories.  While much of the research about place in “punkademia” (Furness) has focused on social spaces like music scenes, or public spaces like the mosh pit or the stage, little work has been done in studying punks in their private spaces.  The rental “band van” which rolls down the Canadian highways in relative solitude is one such space, and much like the canoe of the voyageurs, acts as a vessel for Canadian tales of masculinity, pioneering and survival.  Furthermore, the “axe” that carves out roads through the Canadian back woods, while it is no longer forged of steel but has six strings and is plugged into a power amp, still serves as a tool for settling the land.  Punk oeuvres such as Joe Keithly’s memoir I, Shithead, Michael Turner’s novel-in-verse Hard Core Logo and Bruce MacDonald’s 1996 movie adaptation of Hard Core Logo show that even within a culture of contestation and a spirit of collectivity, ultimately Canadian punk rock road stories also belong to a long standing tradition of mythmaking and storytelling about wilderness and progress.